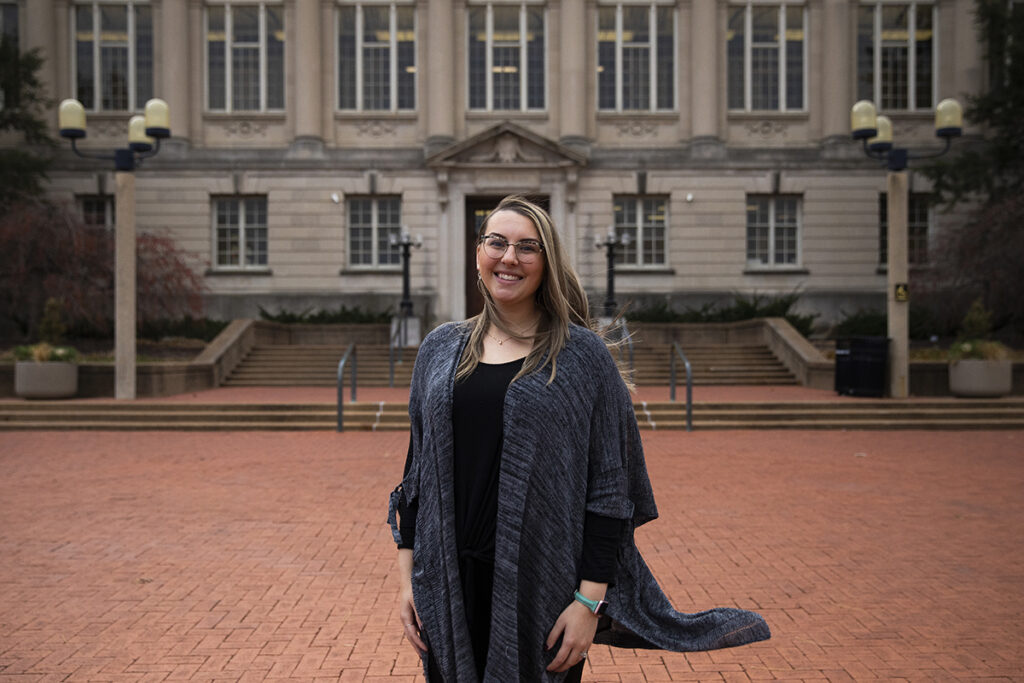 Keely Alexander Franco is working toward a PhD in counseling psychology at Mizzou, where she is the Career Center’s new senior student service coordinator. Photo by Nicholas Benner

Keely Alexander Franco knows just how important a college job can be. For many, it’s a way to help pay off tuition or save money for an apartment. For some, it’s the experience that the job provides. But a first job in college can impact that student’s life.

“I was a server working at a pool in a Springfield, Missouri, country club,” Franco says. “I thought, ‘this will be great, people go there to spend money.’ But it turned out to be running around by a pool in the heat of summer taking people’s orders. It was not what I expected.”

Navigating college and work can be difficult, but Franco emphasizes the importance of the experience. Jobs can provide you with networking opportunities in the future and experiences to talk about in job interviews. Even if it’s not what she envisioned, Franco was thankful she worked at the country club.

“You’re going to have jobs you don’t like, so it’s just as valuable to know what you don’t like as it is what you do,” Franco says. “It helped me understand that no matter what kind of job I do, it’s going to involve other people in many different ways.”

Franco has worked at Mizzou for two and a half years, and will move from a graduate assistant position into her new job as senior student service coordinator in January 2020. She will oversee many of the programs housed in MU’s Career Center, such as working with and training undergraduate employees and counseling students. She will also teach classes through the Career Center and lead the Career Development Network program. Although the title is new, she has done some of the work in her previous position.

“I’ve done little bits, just not on a full-time level,” Franco says. “It’s a nice transition though, because I know the system and how it works.”

Franco came to Mizzou after completing her masters in counseling psychology at the University of Kansas. But her goal has always been to connect with and build relationships with people, which she realizes through counseling.

“You help people when you authentically connect with them,” Franco says. “I don’t think there’s any one thing I do that would help people other than just getting to know them. Helping people is just connecting in a genuine way.”

Through her work at the Career Center, Franco hopes to help students find their career paths and succeed. Through her counseling and teaching, she wants to be right by students’ sides as they grow.

“Being able to watch someone go down that path is powerful to me,” Franco says. “It’s challenging but also very rewarding, because I don’t know where their path leads either.”

Although the future is a little uncertain for Franco, right now she is happy to be in the Career Center. For her, the people not only put a smile on her face, but also make everything she does feel important.

“I’ve worked in a lot of different spaces, but I’ve never had one that has felt like such a positive work culture,” Franco says. “It’s always such a relief to come here. It just felt like this is where I want to be.”