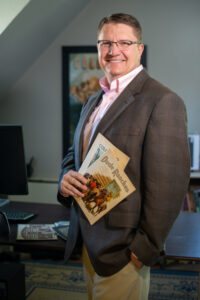 Jerry Frank, an associate professor of history, is the new interim academic director of the MU FIGs program. His research areas include the American West, environmental and indigenous history.

Jerry Frank has traversed the American West throughout his childhood, young adulthood and academic career like a pioneer from a bygone era. His dad’s job in the mining-construction industry took the family to Cortez, Rulison, Rifle, Fruita and Montrose Colorado, as well as Gustine, California; Moab, Utah; and Carlin, Nevada. Frank’s educational trail continued through Colorado Mesa University in Grand Junction for his bachelor’s degree, the University of Montana for his master’s, the University of Kansas for his PhD and back to Western Colorado University in Gunnison for his first professorial appointment.

Suffice to say that appreciating different communities is second nature to Frank, who was named interim academic director for the MU Freshman Interest Groups (FIGs) program. Frank will continue to serve in his position as associate professor of history as well.

“For many students coming to Mizzou from cities and towns across the country, it will be the first time they’ve lived away from home,” Frank says. “They have to find their way in a big, complex institution. Research has shown time and again that if we can get them engaged in a community, with peers who are interested in the same activities and subjects, they’re more likely to succeed.”

Frank’s studies center on the history of tourism and ecology in the West. To research his first book, Making Rocky Mountain National Park: The Environmental History of an American Treasure (University Press of Kansas, 2013), Frank embedded himself in a cabin at the park’s western entrance.

He served as director the Colorado Water Workshop, a group that facilitates cooperation between environmentalists, elected officials, state engineers and urban planners to address water issues. He also directed service learning for the School of Environment and Sustainability at Western State Colorado University, where he “witnessed time and again the power of community and engagement to enhance learning outcomes.”

In 2010, Frank came to the MU Department of History and immediately fell in love with Mizzou. He was selected as a provost outstanding junior faculty teacher in 2013 and a Presidential Engagement Fellow earlier this year. He also served as executive director of Mizzou Advantage from 2013–17.

“This place is like a family,” Frank says. “There are so many great people across this campus — faculty, staff and students — who care about the broader community and will bend over backwards to help you.”

Established in 1995, Mizzou’s award-winning FIGs program is designed to help first-time college students find their bearings at MU both academically and socially. Members of a FIG live near one another in residence halls, have roommates with similar academic interests and take classes with the same core group of students during the first semester. As academic director of the program, Frank will address the findings of the Phillips Committee, a group tasked with evaluating FIGs and targeting areas where they can be improved.

Helping students is also second nature to Frank, whose love for teaching is as vast as the Western frontier.

“The FIG program is exciting to me because it’s not only about helping the student, but it’s also about trying to secure a future for the student and their family that they haven’t even thought about yet,” Frank says. “Higher education can do that. If we keep students here and help them succeed, it can impact their family’s trajectory.

“It is an awesome responsibility and profound honor.”