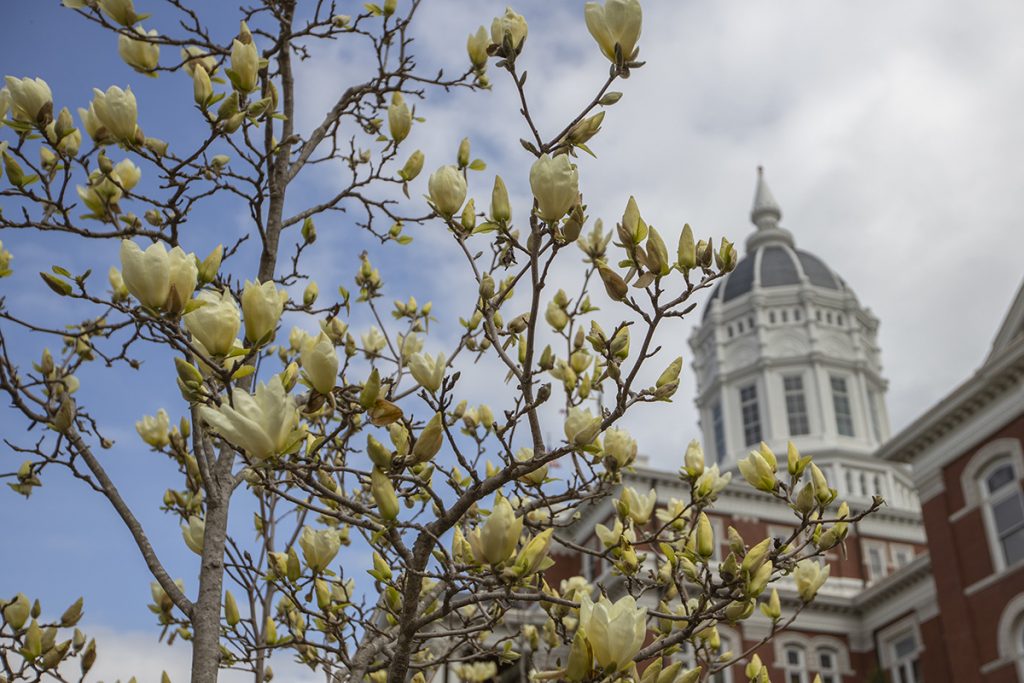 Francis Quadrangle in April is about as postcard perfect as a college landscape can get. Red brick buildings fringed with multicolored blossoms. Meticulously mowed turf striped with the Columns’ shadows. Jesse Hall’s stark white dome claiming a portion of Columbia’s clear blue sky.

It’s an indelible image in Grayson Rainey’s mind as he logs onto his laptop from his living room in Richmond, Virginia. Rainey is one of nearly 30,000 Mizzou students whose academic routine shifted March 16 when the University of Missouri transitioned to distance learning. Like millions of students around the globe during the COVID-19 pandemic, Rainey is adjusting to a virtual campus lifestyle through digital applications, which at Mizzou includes Canvas, MU Connect, Panoply and Zoom. But the sophomore journalism major keeps things in perspective. 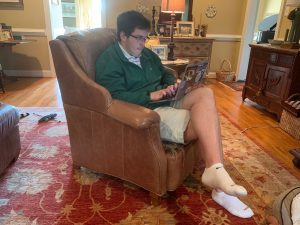 Grayson Rainey, a sophomore journalism major, stays on top of his coursework from his home in Richmond, Virginia. An avid golf fan, Rainey has enjoyed watching reruns of The Masters on ESPN during the COVID-19 pandemic.

“Through this virus, I’ve seen how our lives are fragile and that our world isn’t always perfect,” Rainey says. “This is the first time I’ve taken online classes. I’ve learned some things about time management and how I need to block off certain times of the day to do things.”

Mae Bruce, a freshman journalism major, says her professors have done an outstanding job communicating expectations and providing online resources to augment course materials. Yet in a world of shelter-in-place orders, reporting has been a different experience altogether. 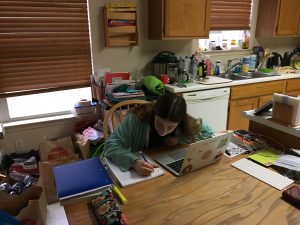 Mae Bruce, a freshman journalism major from Austin, Texas, makes her workspace at the dining room table. Her two cats (not pictured) frequently join her in her studies.

“I wrote a profile about a classmate with ADHD, and I had to ask her to record herself for the audio portion,” says Bruce from her home in Austin, Texas. “I’ve set up my workspace at the dining room table, and I’ve been doing a lot of phone interviews. But I find myself missing things like the coffee at the J Café.”

Jarrod Russo, a biology major from St. Louis, thrives on a “little bit of commotion.” Ordinarily, when he’s not in the lab or MizzouRec, he’s pitching in at the Center for Academic Success and Excellence or snapping photos across campus for his media relations internship. Now, he stays connected to campus and classmates through GroupMe, a mobile group messaging app, and the “discussions” tab on Canvas. 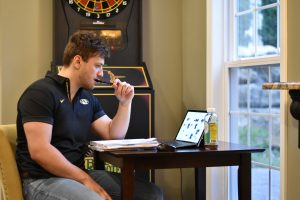 Jarrod Russo, a junior biology major from St. Louis, kicks back in his parents’ basement. He splits time between Columbia and St. Louis, where he did concrete work to make ends meet for two months.

“I miss running into random friends and hugging them — yes, hugging was a thing once upon a time,” says Russo, laughing. “I’ve felt a much stronger appreciation for Mizzou and my life on campus.”

Zoe Rich, a junior art and marketing major and Honors College student from St. Louis, takes daily walks with her sister to keep herself grounded. She has also expanded her virtual horizons. 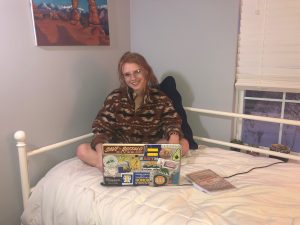 Zoe Rich, a junior art and marketing major, enjoys doing school work from the comfort of her own bedroom in St. Louis. She helps with a project that sends letters to prospective Mizzou students.

“A lot of students have found alternative ways to talk to each other,” Rich says. “I’ve gotten closer with people I wasn’t close with before. My friend created a GroupMe called ‘Going Through It,’ and I’ve made a bunch of friends on there.”

Mizzou has several other online portals to connect students to e-learning resources, including MizzouOne, the Learning Center, and destinations for mental and physical health such as MU Engage and partnerships with Fitbod and Sanvello.

“Mizzou has done a good job of letting students know that people are still thinking about them and there for them,” Rainey says. “I’m trying to stay patient, trying to enjoy each day and not worry about the small things.”