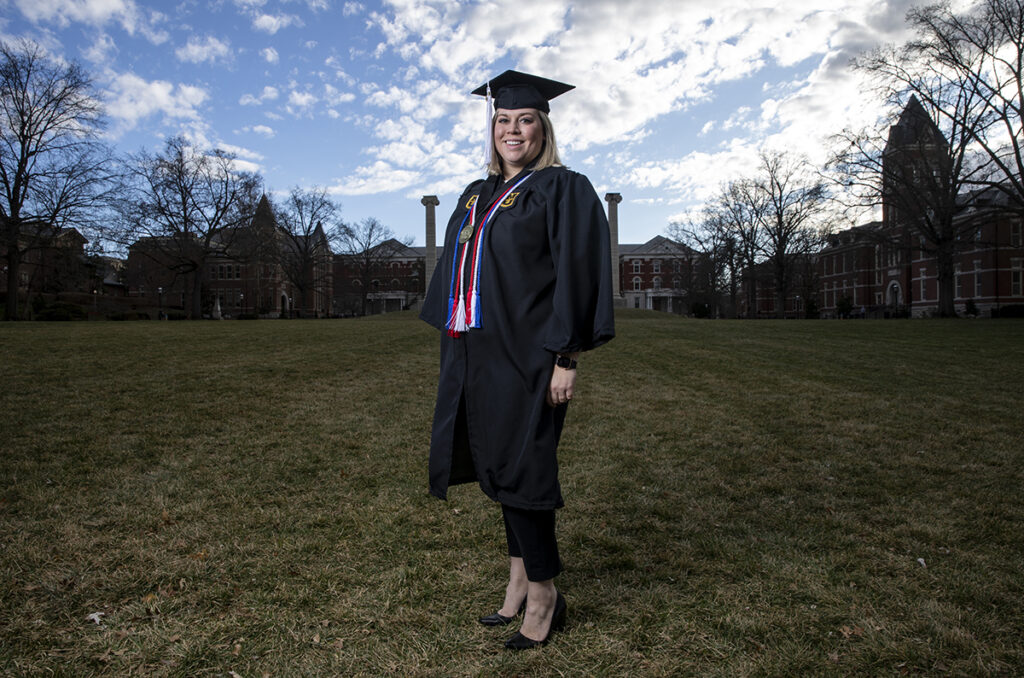 Mariah Best graduates with a BFA Saturday, Dec. 14, 2019, at the Hearnes Center. Photo by Michael Cali

As a U.S. Army National Guard veteran and a Mizzou fine arts graduate — after Saturday’s commencement, that is — difficult assignments are nothing new to Mariah Best. The Platte City, Missouri, native understood the arrangement when she enlisted in 2011 to help pay for college, but her nine-month deployment to Afghanistan still caught her slightly unaware.

“It was a difficult time because my high school boyfriend and I had just gotten married,” Best says. “I was an alternate for deployment. During premobilization training, someone who was slotted got injured and that July, I was bumped up.”

Best and seven others in the 70th Mobile Public Affairs Detachment (MPAD) flew to Kandahar, where she was assigned to “information effects” — mostly monitoring social media and international news for suspicious enemy activity. She had trained for the job at the Defense Information School in Fort Meade, Maryland. 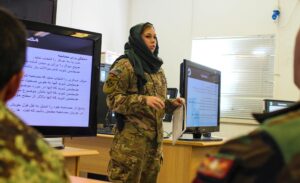 Mariah Best answers a question from an Afghan National Army soldier during a training exercise in 2013 at Kandahar Airfield, Afghanistan. Photo by Cpl. Clay Beyersdorfer

At the time, Best thought her future included Mizzou’s famed J-School where she would write feature stories and practice the Missouri Method. But her hands-on strategic communications experience would be a bit different.

“Whenever there were NATO casualties, I would write the press release,” Best says. “Lt. Gen. Paul LaCamera, the big boss for the whole region, would review it. It was definitely a stressful job at times.”

Best is one of 2,049 Tigers set to graduate this weekend at the University of Missouri, where the four-year graduation rate is at an all-time high — 52 percent for students who started in fall 2015. But her path to a diploma was circuitous.

After returning stateside in the summer of 2014, Best and her husband divorced and she enrolled at Mizzou. But duty called again after the Ferguson protests began, and Governor Jay Nixon sent in the National Guard. Best’s public affairs acumen was in demand, and she was forced to take active duty military leave.

During her time with the National Guard, Best also discovered her true passion — graphic design. She had always been artistic, but a handful of military assignments (T-shirts, flyers and a challenge coin) convinced her to pursue a BFA. She credits School of Visual Studies professors Jean Brueggenjohann, Deborah Huelsbergen and Ric Wilson for encouraging her to experiment, challenge herself and demand more of her art. 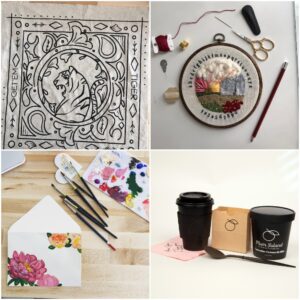 “The packaging projects were fun — a coffee and ice cream place, cereal boxes, a children’s boutique and a wine project,” says Best, who also interned for the MU Office of Undergraduate Studies. “I like building in 3D. It’s challenging but extremely rewarding.”

Best also regularly took advantage of Mizzou’s Career Center and Writing Center, where she used the professional portrait services for her LinkedIn profile and worked with staff to fine-tune a knockout résumé.

Now she is in a happy new relationship, and as she walks across the Hearnes Center stage Saturday, she will prepare for a nine-month deployment of a different sort: she is expecting twins in June 2020.

“It’s crazy. I know a bunch of other people who are having babies, and an unusual number of people having twins,” says Best, beaming. “The immediate plan is to do some freelance work, develop my personal brand and get ready for these two.”