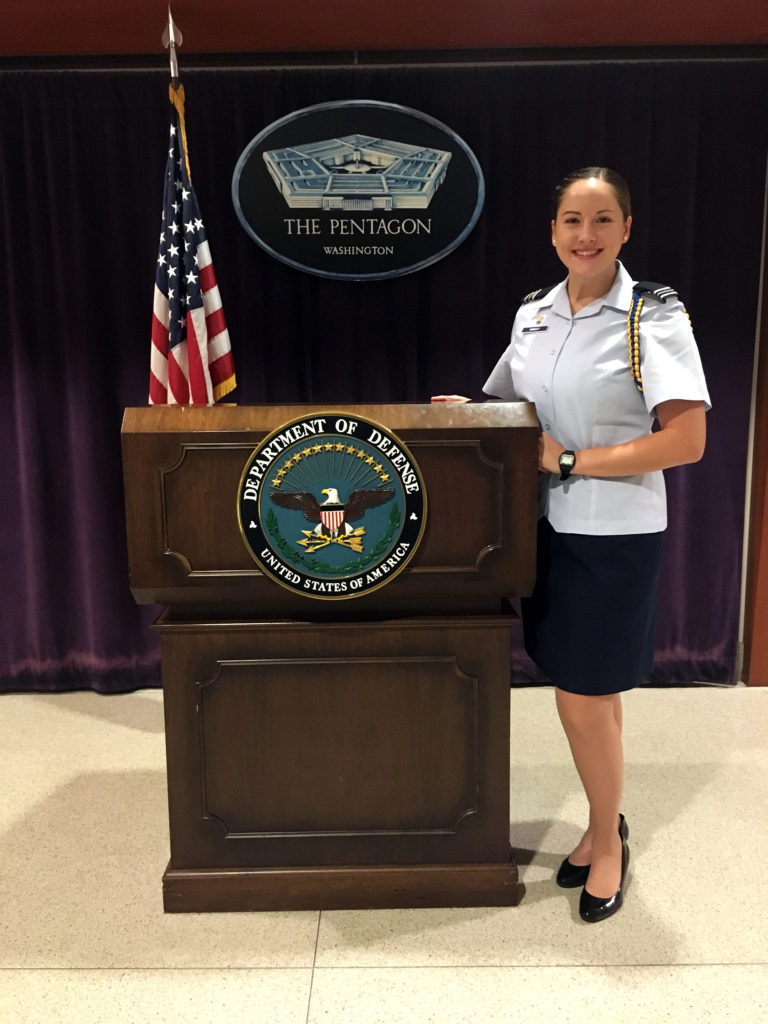 Mizzou senior Lindsay Wright’s summer internship introduced her to the interworkings of the Pentagon and the Department of Defense.

Senior Lindsay Wright took her passion for organizational communication and military law all the way to the Pentagon this past summer for a prestigious internship with the United States Air Force Judge Advocate General (JAG).

Wright worked in the JAG Corps’ Operations and International Law Directorate, reviewing draft correspondence for the Air Force Chief of Staff in his role as the international air chief. One of Wright’s duties as an intern was to participate in a weekly meeting of the Department of Defense (DoD) Law of War Working Group as they addressed issues resulting from the revision of the DoD Directive on the Law of War Program and its position regarding lethal autonomous weapons.

“This opportunity exposed me to issues and topics I wouldn’t have been exposed to otherwise, but it would not have been the same experience without the people I worked with,” Wright says. “These individuals pushed me to be the best version of myself.”

One moment that stands out to Wright was learning how to solve a Rubik’s Cube with an officer named Major Toronto. She says this gave her brain a break from the intense work she was doing, while allowing her to get to know the other officers on a more personal level.

At MU, Wright studies Organizational Communication and is pursuing minors in Aerospace Studies and in Leadership and Public Service. She says her studies have helped hone her written and verbal communication skills, which were a crucial aspect of her work at the Pentagon.

Wright is a member of the MU Civic Leaders Internship Program (CLIP) through the Office of Service Learning. CLIP gives undergraduate students opportunities to pursue internships in state or national government or non-profit work. Wright lived with other CLIP students on Capitol Hill and took course credit through Mizzou for her internship over the summer. CLIP also arranged events for students, which included visits to the FBI, the White House, State Department, Embassy of Kosovo and the Pentagon.

Wright is in Mizzou’s Air Force ROTC program. Having known she wanted to become a lawyer, Wright soon discovered she would need to be in the military to pursue military law. What at first seemed like a far-fetched goal soon became an essential aspect of Wright’s experience as a student and future lawyer. She is now serving as the Communications Officer in MU’s ROTC Cadet Wing.

“The Air Force ROTC has been one of the defining parts of my time at Mizzou,” she says. “I know I was meant to serve our country in the Air Force. I have met the most amazing people and have had opportunities that I would not have had had I not chosen to serve my country.”