Since the fall of 2015, a small group of students has come together to discuss philosophical readings in an effort to find truth. 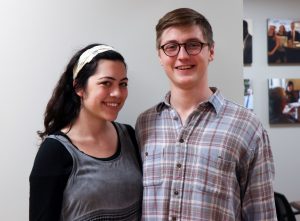 The student-formed Washington Society is a philosophical discourse organization in which students agree on certain Philosophical Convictions, which allows for discussions to continue beyond what can usually be accomplished in a classroom setting—where baseline agreements are not already decided. This process includes a two-hour discussion about the reading one week, followed by a more formal deliberation that either affirms or denies a resolution the next.

Some resolutions the group has discussed include denying the assertion that the educated mind best receives justice and affirming that privacy is an inherent right. Discussion material has included Plato’s Republic, the Federalist Papers and Les Misérables.

“There are so many class discussions that get cut off pretty quickly after, essentially, people realize that we have different convictions about the way the world operates,” senior Economics and Classics major Heath Snider says. “The main idea in the Washington Society is finding truth. We use our assumptions to keep us a society that agrees on things so that we can move forward.”

Snider was one of the students who helped create the organization. The idea for the society began with MU graduate Bishop Davidson, who saw similar organizations already in the works at Ivy League schools and thought a similar club would be a good fit for Mizzou.

The name of the society came from Davidson’s fascination with Roman statesman Cincinnatus, who showed devotion to the republic in times of crisis and gave up his power once the crisis was over. While it was common for Roman leaders to serve multiple terms, Cincinnatus only held one term and left after he had improved the state; he felt that his duty had been fulfilled and went back to farming. George Washington, then, is seen as America’s Cincinnatus.

“I think a big part of being in the Washington Society that has helped me with my undergrad work is pursuing ideas past the point of just being interested in them, but actually really looking deeply into them, seeing what I like about them, and then even using them in other topics of discussion,” senior Journalism and English major Bailey Conard says. “It’s made conversations better because they’re not just about arguing or trying to prove anything to anyone.”

Conard and Snider have participated in the roles of discussion leader, chairman and vice chairman, holding the responsibility of setting a vision for the upcoming semester, executing that vision and facilitating meetings.

They are also both involved in the Kinder Institute’s Society of Fellows—an MU undergraduate program interested in exploring the philosophical foundations, historical development and contemporary practice of American democracy. Fellows attend meetings with MU staff and exclusive lectures with visiting speakers, and are invited to contribute to the Institute’s undergraduate-run Journal on Constitutional Democracy.

“Kinder provides this really immersive opportunity to get involved and explore whatever interests you may have outside of your major,” Conard says. “(Fellows get to) learn just to learn, without having to be graded or tested on it.”

This summer, Conard will be a Kinder Scholar, participating in the summer program in Washington, D.C., where students take a course on American constitutional and democratic traditions, supplemented by an academically-based internship and field trips related to their studies.

The Washington Society has a close relationship with the Kinder Institute, which houses society meetings and helps put on open events for people outside of the organization. This year, the Washington Society hopes to place a bigger focus on recruitment so they can continue fostering interest in philosophical discussion.